The Historical Fire Company is always searching for historical material about firefighting, in Larchmont and around the world. Larchmont and the Sound Shore was a center for the cartoon production in the earlier decades of the 1900s, and we have located a cartoon titled “Hook and Ladder Number One” produced by Terrytoon Cartoons. 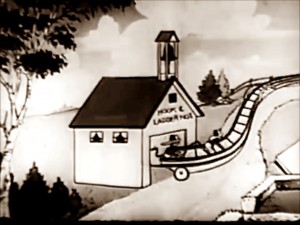 The cartoon features a firehouse that looks a lot like Larchmont firehouse from the 1890s including the old bell towers. At the start, a chorus sings a ditty about the members of Hook and Ladder Company.

You can see the entire cartoon here. It begins with a short credit, but in about 30 seconds the cartoon starts. To see the video in a larger format click here: Hook and Ladder Cartoon from 1932.