More than 100 years after his death, the Larchmont Historical Firefighters will add John O’Neal to Mamaroneck’s temporary civil war memorial at the Larchmont and Mamaroneck American Legion Posts. O’Neal was a Mamaroneck, NY resident who served in the U.S. Navy during the Civil War aboard the U.S.S. Malvern, President Lincoln’s flagship of the North Atlantic Blockading Squadron.

O’Neal is the latest and the sixty-second Mamaroneck Town Civil War veteran to be rediscovered by the Larchmont Historical Firefighters, and added to the temporary civil war memorial.

The Town of Mamaroneck, like many New York communities, does not have a community memorial to its Civil War veterans, and, until recently, history books said their records were lost across the state. However, based on years of persistent research with support by both the Larchmont and Mamaroneck Historical Societies, the Historical Firefighters found 62 Civil War veterans with connections to Mamaroneck and commemorated their service with a temporary memorial at Larchmont and Mamaroneck’s American Legion Halls.  John O’Neal is the 62nd veteran added to the list, thanks to his great-grand-daughter, Viola Beecher of Mamaroneck, who contacted the historical firefighters providing information about his Civil War service in the Navy. The family information was perfect, and led to even more Navy records.

Therefore, on May 23, at the Legion’s dinner with visiting “Fleet Week” Navy sailors before Larchmont’s Memorial Day Parade, the firefighters will add O’Neal’s name to the memorial.

Ray Maldonado, president of the Larchmont Historical Fire Company, explained the project. “We think the sailors will be delighted to help is to honor one of their own. At the time of the Civil War, most firefighters were volunteers and many joined the infantries and the Navy. So when we trace back our history, it leads us to the Civil War service of our local firefighters. Someday we want a permanent memorial, but not until we have retrieved all of the names.”

John O’Neal is pictured below with Civil War veterans in 1917 at Harbor Island Park in Mamaroneck. The photograph is from the Mamaroneck Historical Society. 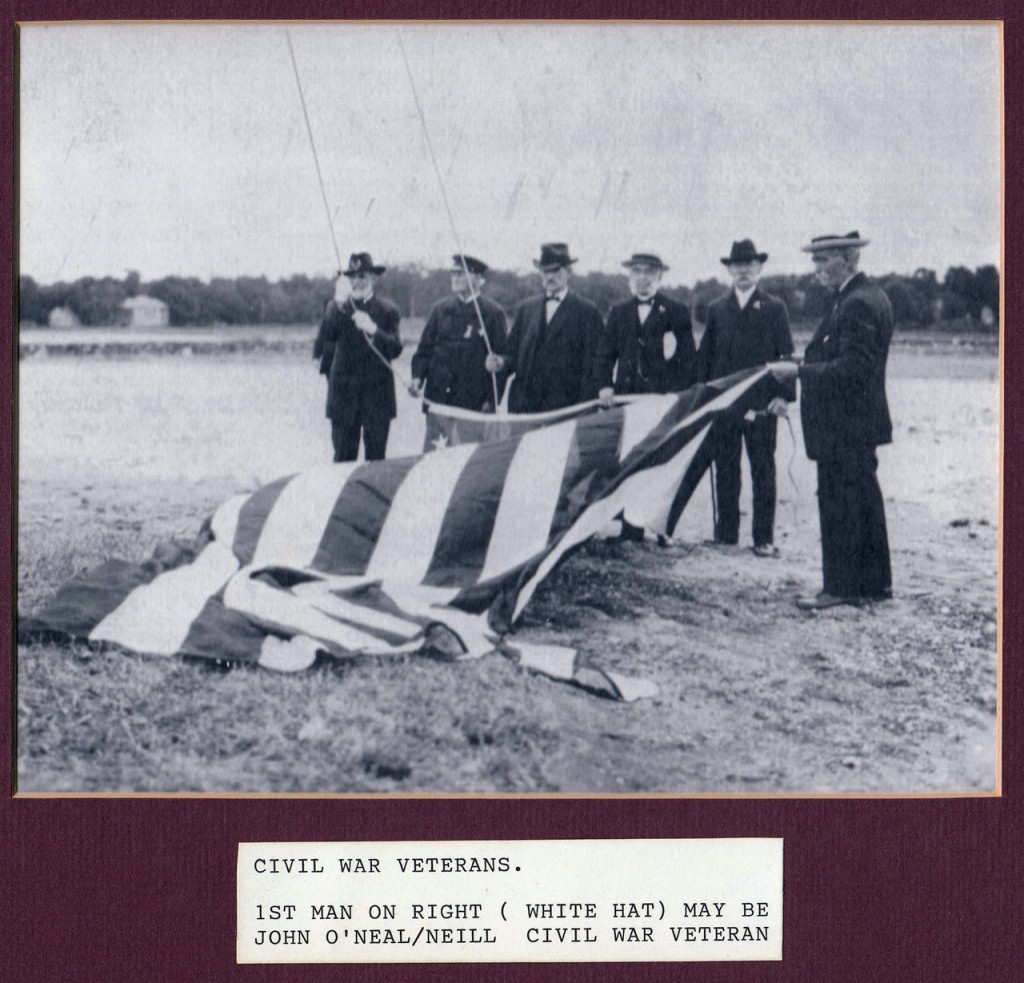 John O’Neal is on the right.

John O’Neal, whose family name is often spelled O’Neill by his relatives, was born in 1846 in Julianstown, Parish of Stamullen, County Meath, about 20 miles north of Dublin, Ireland. He was born to James O’Neil and Mary Keenan O’Neil. They came to America in 1848 and went immediately to the Mamaroneck / Rye area. About 1858 his parents bought a house on the corner of what is today Halstead and Union Avenues near the Mamaroneck train station.

Family lore and O’Neal’s pension application states that in 1861 (age 15) he joined the Army and was sent to Fort McHenry (via Brooklyn) to relieve the remaining soldiers who had fought at the first Battle of Bull Run. His ship was overtaken by a messenger ship instructing him to return to Brooklyn as the Bull Run soldiers had already arrived there. While back in Brooklyn it was discovered that he was under age and John was sent home.

The Malvern’s last notable service for the Navy was to convey Abraham Lincoln up the James River to Richmond when that city fell to Union Forces and the Confederates evacuated. Family lore has it that O’Neal shook hands with Abraham Lincoln, and it seems fairly certain that he actually did.

After his discharge he returned to Mamaroneck to work as a landscaper, marrying Mary Ann McDonald, who also grew up in Mamaroneck. They had four children, including John O’Neill who became a Sergeant in the Mamaroneck Police Department. O’Neal died in Mamaroneck in 1917.