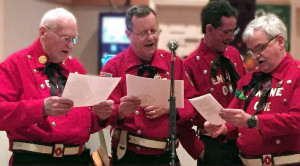 Irish Dancers: There will be a show of traditional Irish dancing.

Music by SWAY, a local Larchmont band: Andy Hilfiger, Ted Utz, Lou Young, Mike Bishop and Tory Ridder will entertain with original compositions and our unique list of classic cover songs. Here is a link to more information about them: SWAY.

Firefighter Craft Beers to be Sampled: In addition to traditional fare, music and raffles, Irish Night will feature a tasting of craft beers, including those brewed with firefighters in mind.

1891 Extinguisher Cart to Appear: Also making an appearance will be members of the Historical Fire Company in their parade uniforms and illuminated helmets along with the 1891 Fire Extinguisher Cart which they pull in parades.