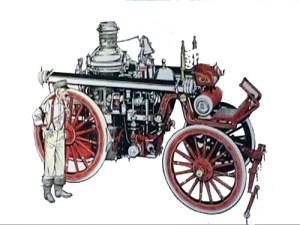 Hose Company to be Honored: The Larchmont Historical Fire Company has revived the Irish Night tradition, and this year dedicates the feast and festivities to the Larchmont Hose Company – the oldest of the four Village firefighting companies. It was organized in 1889 (before Larchmont was established as a village in 1891) and was first known as the Larchmont Manor Fire Company. Hose Company is best known for its distinctive parade uniforms of white trousers topped by red shirts and helmets – an outfit based on those worn in the Civil War by the “Fire Zouaves.”

Firefighter Beers to be Sampled: In addition to traditional fare, music and raffles, the Irish Night will feature a tasting of craft beers, including those brewed with firefighters in mind and selected by the Historical Fire Company’s beer-meister, former Larchmont Fire Chief Jim Sweeney. 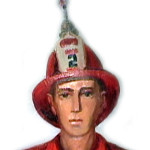 Vintage Fire Company Mural to Appear: On display at Irish Night will be a mural, originally painted by Mimi Jenuwein, which hung for decades in the Hose Company social room on the second floor of Village Hall. Restored in the 1990s by local artist Mary Hargrave, it again sustained damage following renovations that consolidated and moved the four company rooms to the third floor. Restored again in 2014, it will appear at Irish Night.

Engine One & Fire Chief Car to Appear: Also making an appearance will be members of the Historical Fire Company in their parade uniforms and illuminated helmets along with their two restored fire vehicles: the 1922 pumper Engine One and 1910 Brush Roadster chief’s car. For more on Engine One, its service, acquisition and restoration, click on the articles in the menu at right.

This digitally “stretched” image of Engine One was used for a portrait of Larchmont Fire Department volunteers in 2005.