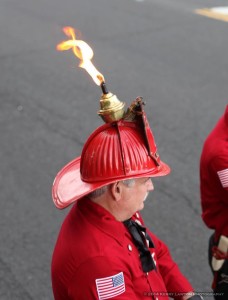 The Historical Fire Company marches with illuminated helmets – helmets with kerosene torches. These were used in the early 1900s for large parades. The torches illuminated the marching firefighters. 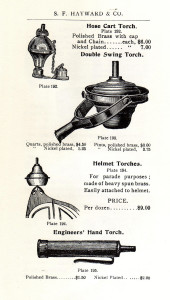 An advertisement for the helmet torches worn by the Historical Fire Company members at parades.

To the left is an advertisement for the torches, from a catalog in the early 1900s. The manufacturer was C.F.Hayward & Co.

We are seeking a source for restoration versions of these torches. We also regularly purchase and restore used aluminum Cairns Senator fire helmets, which can be adapted for the torches.